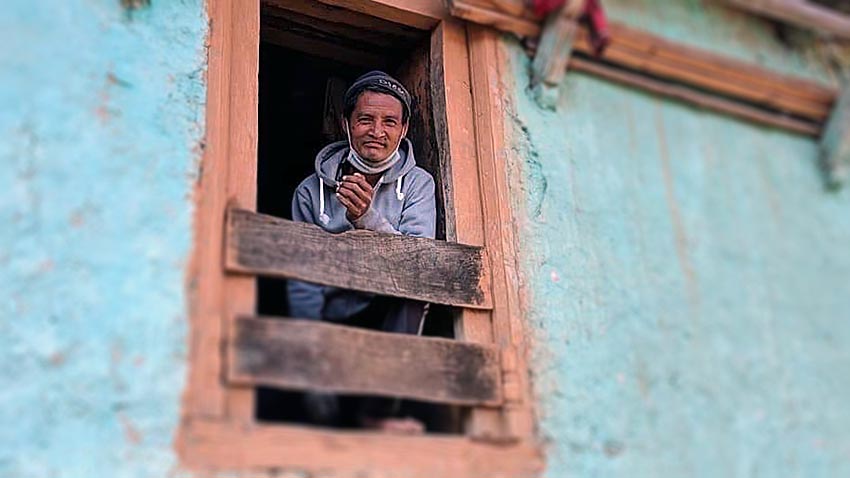 Not long ago, I watched a man carefully walk into clinic, cane in hand, right arm and leg trapped in contracture from a stroke. He sat down silently and handed me his chart. I read the words hemiplegia…. aphasia… I turned page after page as other patients filed into the clinic to sit in the open chairs, waiting for me, the “new doctor”. I sat on my seat, my mudha, and continued to stare at the stroke victim’s chart as this new world faded around me.

As a practitioner in the United States the resources to work with stroke is limited to very rare opportunities in hospitals. My experience with stroke had only been in textbooks, lectures and TCM theory. This was new.

Taking a moment to compose myself, we greeted each other in the customary way of the Nepalese: I said namaste as I pressed my palms together and assumed direct eye contact. Bimdev returned the gesture with one hand raised, his right hand betraying his illness, and muttered an unintelligible reply. I began my work, taking vitals, touching his scalp, hands, arms, and feet. Looking into his eyes, I knew I was nowhere near instilling that patient doctor trust so crucial to healing and that I needed to gain it if I were to help this man. 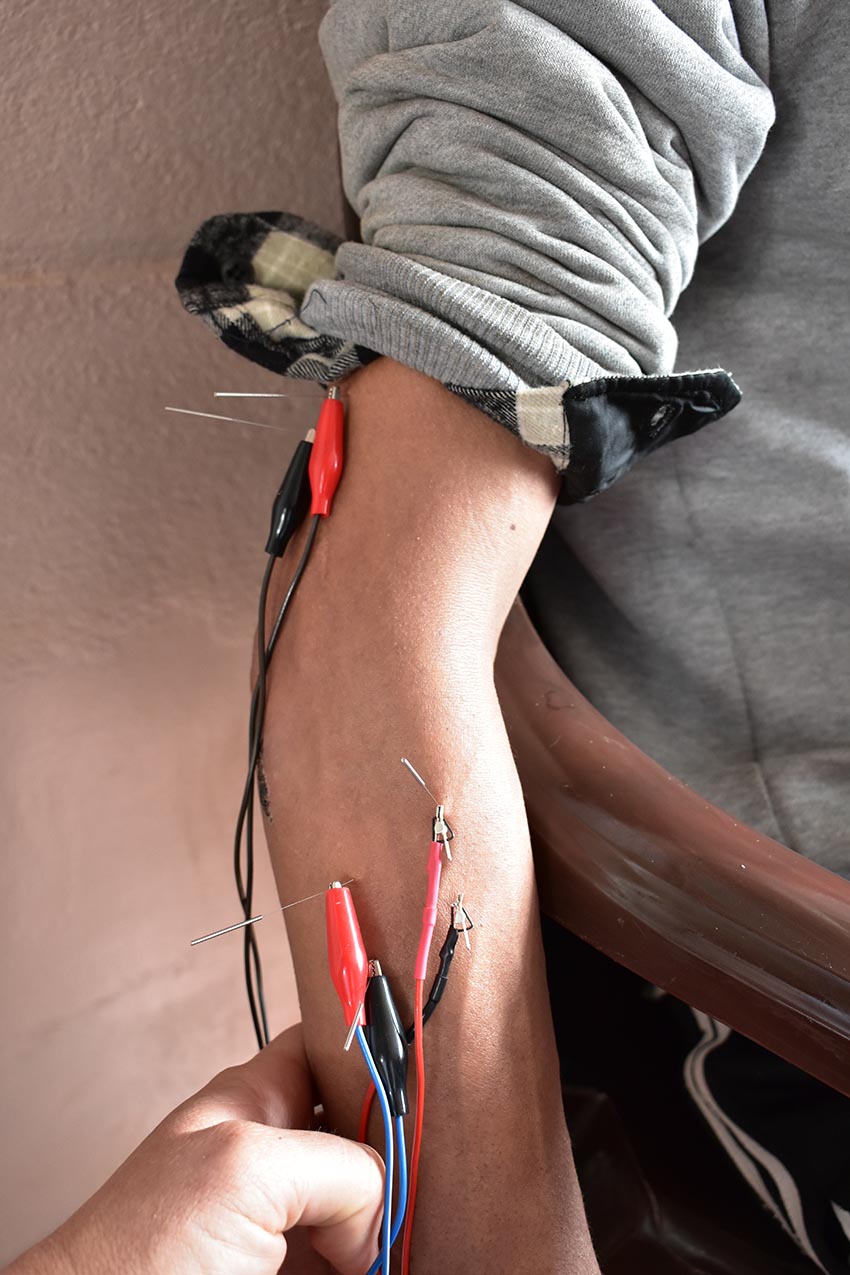 I brought Bimdev’s chart back to my room that night to search for more information. He’d been going to the clinic for many years so his chart was big, but the practitioners before me had little more to say than that Bimdev was a quiet guy who never offered much information during the intakes. His hospital records filled in the blanks. Rheumatic fever, possibly a result of an untreated streptococcal infection when he was young permanently damaged the mitral valve in the left ventricle of his heart. Four months ago Bimdev’s stroke was due to the medical consequence  of an emergency appendectomy. The doctors had no choice but to take him off his blood thinners in order to perform the lifesaving surgery. The blood thinners had been protecting him from blood clots. During Bimdev’s recovery a clot formed and went directly to the left hemisphere of his brain leaving him with weakness in his right limbs, and difficulty speaking and understanding conversations.

The next morning at clinic, armed with my textbook diagnosis. I started our session with a few words. My interpreter spoke while I looked directly at Bimdev. “I am so sorry this happened to you. This illness has left a hole in your heart both physically and spiritually. I can’t help you without your consent. Do you want my help?” Bimdev nodded yes. It seemed an obvious answer, but we needed this contract. We were going to do this together. We began our work. 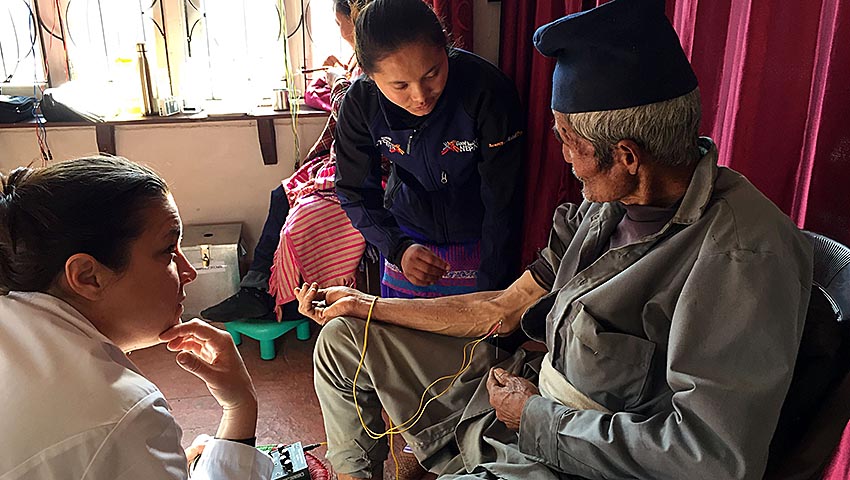 Our first few sessions began  with massage oil on his right arm and hand, pressing and following the six acupuncture meridians along the arms. It was as much a trance for my mind as it was for his. With three patients an hour, I still wanted to spend a moment forming a relationship with each patient. Verbal communication was often overwhelming for Bimdev, so massage provided  our connection. After extending contracted joints and massaging his right arm, I would massage his left hand and arm just to remind the right and left of their innate capacity to  communicate with  each other.

Bimdev was improving everyday. As the days went by, we practiced vowel sounds and he worked on moving his mouth to form oos, ees, ahhs.  Repeat, repeat repeat, creating new connections in the brain. It was amazing to watch, and I reminded him often of his progress. Everyday was a variation of  massage, acupressure, speech therapy, and needles. The acupuncture and ESTIM were speeding the progress. I activated scalp points for speech and other therapeutic points to extend his contracted muscles. Together we awakened tonifying points for recovery. The weeks went by too quickly. 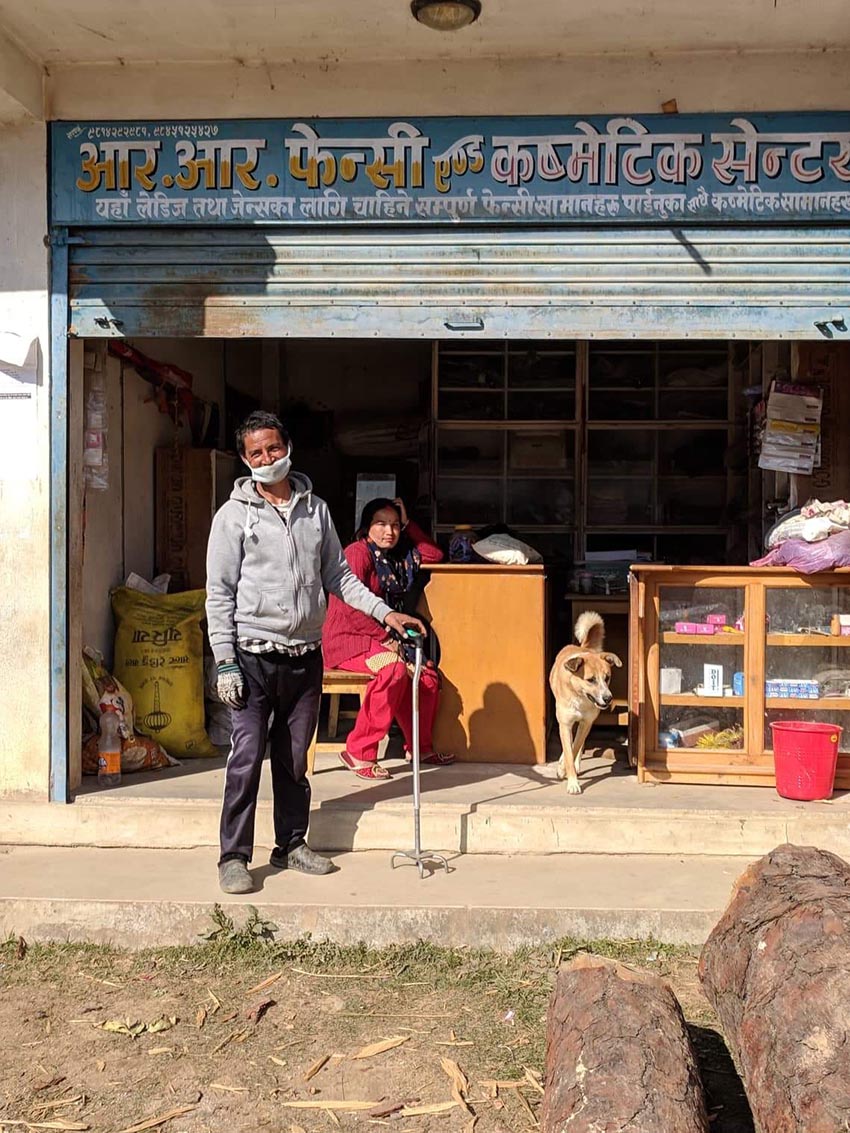 There is no privacy in Nepal. Doors have no door knobs - they swing right open in the wind if they are not  bolted. The neighborhood “tap”, where the village gets water, is also for bathing and washing and is about as social a spot as a Western office water cooler. The rules of private property are also very different. During my free time I roamed across terraced fields, past open doorways, and no one seemed to care.

Patients had no sense of privacy in the clinic either. If there was something worth watching it was not uncommon to have a curious crowds craning necks or peering through the clinic windows. This was very difficult for Bimdev he did not  want people to see him try, yet his condition was irresistible to any passing spectator. The crowded clinic was often more than he could bear, and when he was escorted by his wife, he would insist she wait outside the clinic while we worked. One morning Bimdev was accompanied by a young woman who I can only describe as grace personified. Even Bimdev seemed in awe of her, his face brighter and lighter in her presence. So lovely in movement and beauty, I was charmed by her immediately. This young woman was Bimdev’s daughter. I introduced myself and asked her name. She spoke English and said her name was Malati. After a few weeks of pointing at handmade flashcards of kukur (dog), anar (pomegranate), pani (water), ahma (mother) and getting nowhere, we had our inspiration. “Bimdev,” I asked, “would you like to say your daughter’s name?” Eyes welled for both of us.

From this moment on, Bimdev’s chart is full of enthusiastic scribblings of progress and setbacks as we both learned how his brain worked. Not speaking the same language was a large hurdle for us, but the days when my interpreter was busy with therapy on another patient was when Bimdev and I found our own language. I would point to my mouth, press my lips together and make the simple sound mmmmm. He, no longer uncontrollably puffing his lips, mirrored my gesture and sound. “Yes!” I’d say, and then it was mmm mmm mmm for days.  We added the vowels at each session ahhh, aaaa, eeee, ieeee, oooo ouuu, uoo.  After mastering m, we went after l. I  asked him to put the tip of his tongue to the roof of his mouth and he complied, something that was not possible only weeks ago, llll, llll, lll. Though Bimdev’s ability to form words with his mouth was improving  he still wasn’t able to  put the consonant with the vowel sound yet so the clinic was full of he and I making noises mmmmm, llllllllll, and tt. His mouth was always forming words ahead of his speech  one day, I asked Bimdev, mmmmmahhhh. Bimdev’s lips formed the letter m quickly then he soundlessly opened his mouth to an ah. After a few repeated attempts he did it, maaah, maah, mah, mah, mah.

The set backs, which were numerous, were actually learning curves. One day, out of the blue, he started making clicking sounds. We amused each other with the new action and sound, but the rigid tongue movement to the roof of his mouth got confused with the gentle la, and it would take a while for him to register the softness of his tongue for different uses. We were stuck on ka, a sound I believe came from kukur (dog), which set us back for almost two weeks. The speed at which we moved seemed fast, but perhaps it was the milestones we set and the enthusiasm that made it manageable for both of us. It was  only very recently that I ask Bimdev to say, Mala. He began, ma, ma, ma, ma. I touched his knee and pointed to  my mouth, la. He looked down from his usual eyes on the ceiling ma, ma pointing again, his tongue just touched the roof of his mouth, in la form, but no sound. “Yes!”  We tried again for three days, until it was a perfect, Mala. “Ramro,” I said. Good.

Four weeks into my camp stay and my walks through town often included passing Bimdev in town. We would make eye contact as if we had a million things to say to one and other, which always translated into big breaking smiles on his face. Sometimes I would see him in front of a store with other men and I would  holler, “Namaste, Bimdev!” His reply, an ear to ear grin. The other day, while he was leaving, I said “bollie batola,” see you tomorrow, which had him smiling so hard I could almost hear him laugh. Perhaps I made the impression on him, that both of us were trying to speak and it was ok to try and repeat. 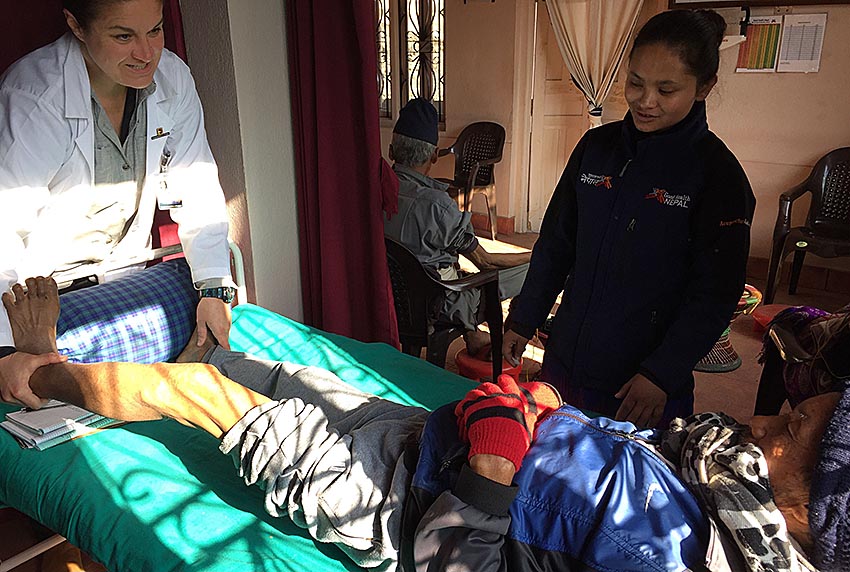 It was nearing the end of my stay at the clinic when I explained, “Bimdev, this is the last week of clinic.” I continued, “Dr. Emma has been following the work we are doing and she is going to work with you when I leave.” He bobbed his head back and forth, the traditional yes, which still looks like ‘no’ to me. “I was hoping you could say Malati before I left.” Bimdev’s eyes were a little solemn. We gave each other the customary namaste and he walked home on his own, no longer needing a family member to look after him. The next session we sat down and practiced the three syllables separately. Then the first two together, I touched his knee and pointed, teee. And there it was. His mouth formed the eee with no sound and he had done it. We practiced again and got three beautiful, quiet, Malati. This beautiful man just said his daughter’s name.

I am sorry to have met Bimdev under these circumstances, yet it is hard to leave him. Bimdev and I have challenged each other. I hope our time together has made his heart a little stronger and bigger, I know it has mine.

As a practitioner in my fifth year the experience at Suswasthya Clinic has had a profound effect on me. I have loved every moment here. As my focus returns to home I wonder how I can improve my clinic in the US to be more efficient for treatment of musculoskeletal pain issues and offer more affordable treatments to long term and palliative care patients who need regular care. I know I am a stronger, more versatile, communicative practitioner because of my time here. I am forever grateful for the interpreters and staff who have been generous with their time and experience and Nepal is pretty awesome too. Nepal is sooooo awesome. Tsering Sherpa once assured me, “If you can physically make it to Nepal, Nepal will take care of your Mind and Spirit.” I trust-fell right into his words. I settled into my routines at clinic, and the Nepal I perceived gave way to a discovery I can only identify as feeling completely at home. ---Kate Cauley