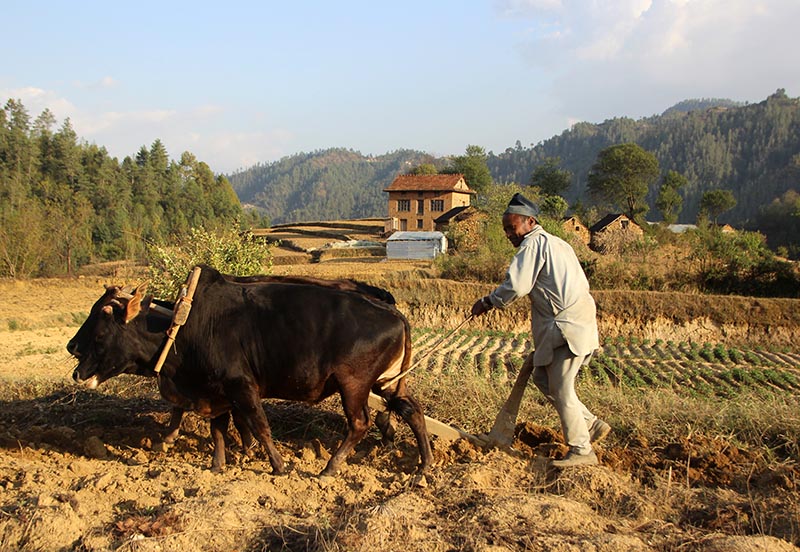 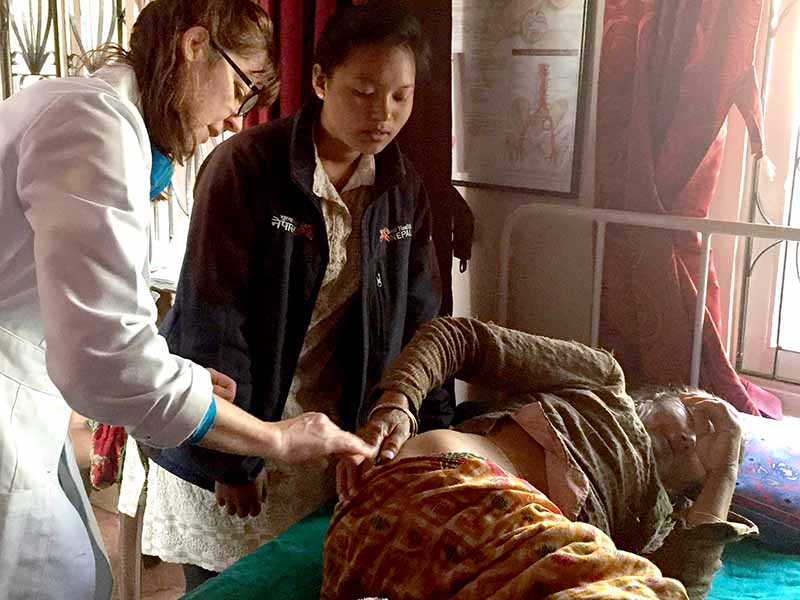 As an American Acupuncture volunteer for Acupuncture Relief Project (ARP) in Nepal, I stepped into an eastern culture that is a distant shadow of my own, regarding the traditional farming lifestyles amongst a rich, agricultural setting.  Our group of 3 American and 1 Australian Acupuncture volunteers inhabited a farming village named Bajra Barahi, during March and April 2018.   An authentic way to experience Nepal is by walking through the farming villages and fields, as agriculture is one of the largest contributions to this country’s economy.  ARP is in the middle hills region or Pahad, mainly populated in river and stream bottoms that are good for agriculture.  This region is the best place to experience village life, as it is the most traditional. 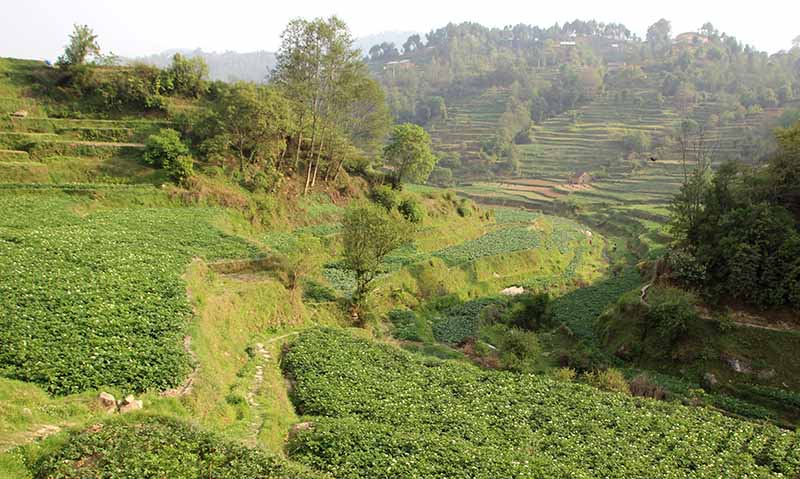 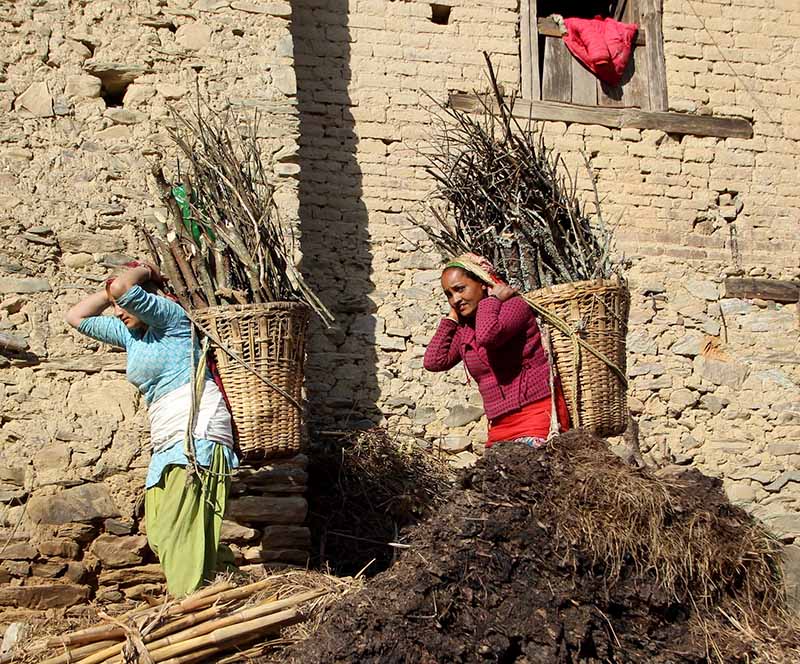 The agricultural landscapes of Nepal are lush and breathtaking, especially in the spring and summer when crops are flourishing.  All year round the farmers are rotating seasonal crops, such as, potatoes, cauliflower, wheat, mustard, rice, cabbage and chile.  It is mostly terraced along mountainsides, making use of all space from this rugged terrain.  Imagine amongst this idyllic setting, being back in time 100 years ago in traditional farmlands: there are no tractors, no Monsanto, no combines, no corporate farming, no John Deere.  Just the land, the people, goats, water buffalo and simple farming tools:  hoes, scythes, plows, sickles, etc.  Welcome to Nepal.  One of the trademarks of rural Nepal is the Doko, a carrying basket made from durable bamboo, hand-woven in a v-shape, allowing the average person to carry 20-50 kg on their back.  It has shoulder straps and head straps called namlo that take part of the load off the shoulders.  Dokos are used to carry grains, goods, vegetables, compost, etc.  It is common to see men, women and children carrying doko’s on their back with the namlo straps on heads and shoulders, throughout the villages and fields in rural Nepal. 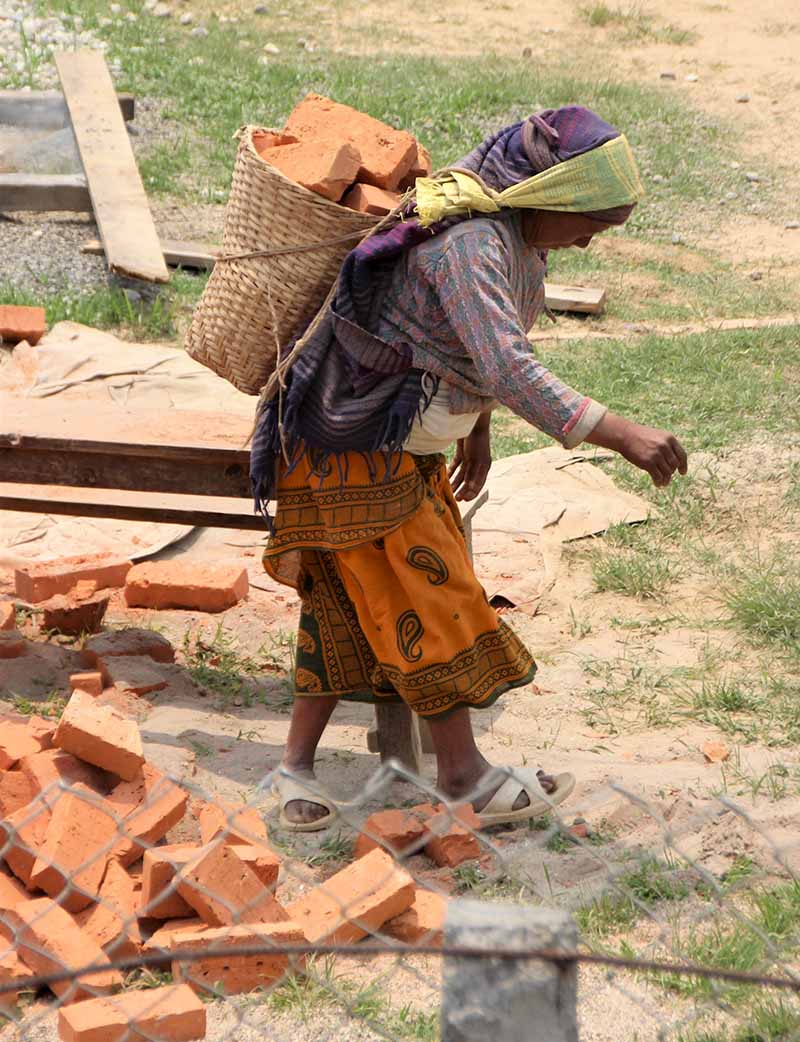 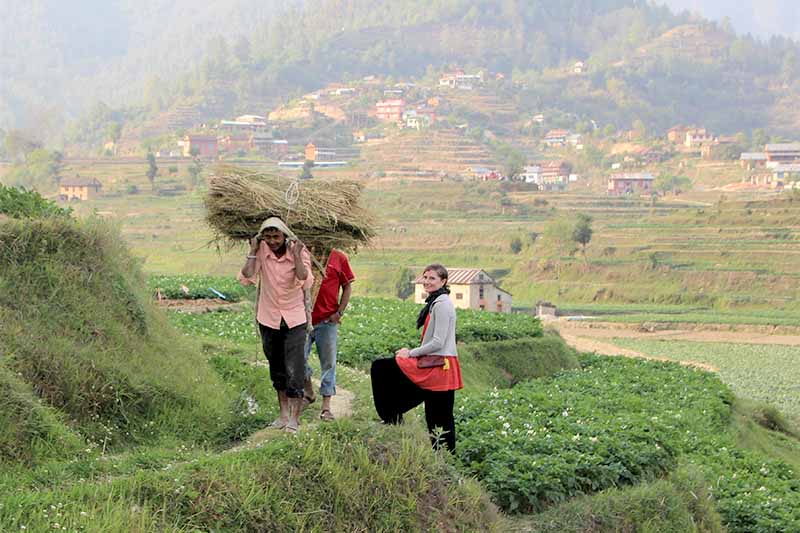 Now envision, a 73-year old woman with flip-flops, carrying 30 kg of potatoes in a doko on her back, climbing up steep terraces on rocks and dirt, or imagine a 60-year old man barefoot in the dirt, alone, hoeing a turf of land that is a part of a whole mountainside of terraced crops.   When you spend time here, this western anomaly becomes a stereotypical reality in rural Nepal.    Arriving in March during the planting season for potatoes and cauliflower, I witnessed many elderly women, looking to be in their 70’s, carrying dokos stuffed with compost taller than their own height, walking up and down steep hills.   In awe, I even saw an elderly women walking with a Doko on her back full of BRICKS!  (I have the photo to prove it!) In Nepal, everyone does the farming: elders, men, women and children.   What I learned from my elder patients is that many of the young people have moved into Kathmandu to work, leaving the farming labor for their parents and grandparents, who do not know any differently than to keep farming.   It came to my attention that more women than men work in the fields, because men leave the area (sometimes to foreign lands) to work for higher wages, leaving the women at home to manage the housework and farming. 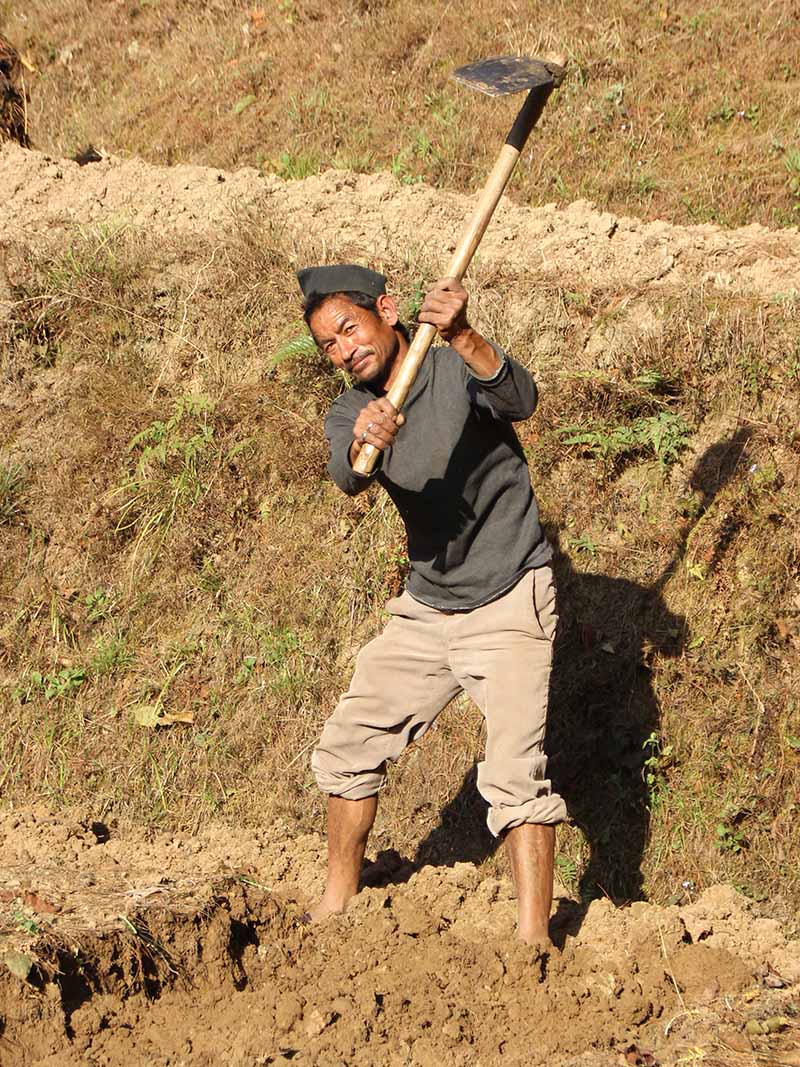 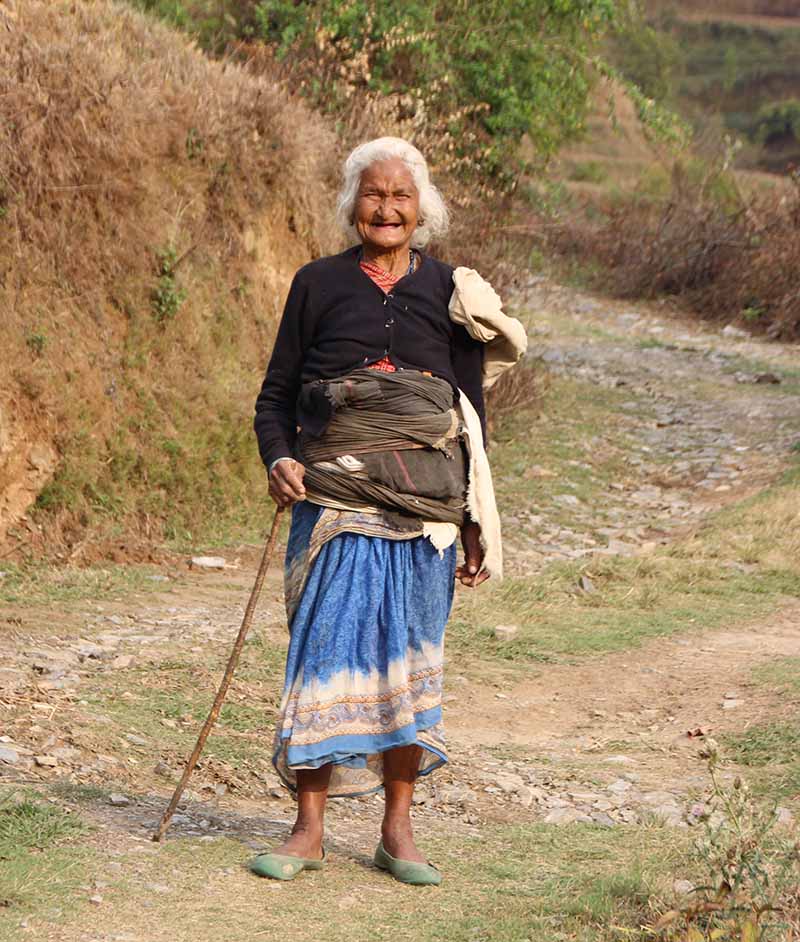 Their trodden paths are just as remarkable as the loads they carry.  I took many walks and even got lost at times, going up, down and around steep passages, wandering through narrow terraced edges, upon stone paths and bridges and irrigation walls through the labyrinthine, lush fields.   Our first week, another ARP volunteer, Alisha, and I got lost in the fields and were trying to navigate ourselves through the obstacle course.  It was a big enough challenge to keep from spraining an ankle, as we tramped through mud, rocks, trees and branches that we grabbed for support.   We neither one knew Nepali language, meeting farmers along the way.  They seemed amused, greeting us, “Namaste”, then using gestures and pointing for advice on directions with a mischievous grin.  Another day, we explored the fields with a Hindu temple in the valley, surrounded by mountainsides of cauliflower and potato crops. The Hindu music blasted loudly from the temple throughout the terraced fields, providing an amphitheater to amplify this vibrant music for the workers to hear.  It was a fun, upbeat walk with everyone being energized mutually by the same music. 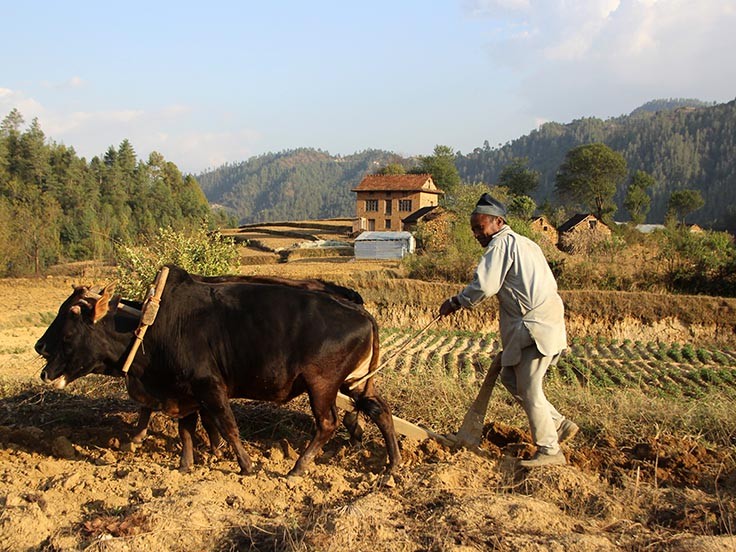 It was very helpful for me to immerse myself in the community and surrounding terraced farmlands with walks to meet the people and see how hard they work:  this way I could relate and understand better my patients and their orthopedic issues.   It’s obvious why so many of them have back and knee problems, sprained ankles and falls.  One of my female patients amusingly told me how she recently fell:  while walking with her doko full of goat feces (compost), she toppled over face down.  She still managed to walk a couple miles into town for her acupuncture treatments, and of course, she is still working.  This I heard many times from my patients, that they continue to work, even with pain and injuries because they say no one else can do it.  With the trend for the young people moving to the city or foreign countries, this generation may be some of the last to uphold this farming and cultural tradition 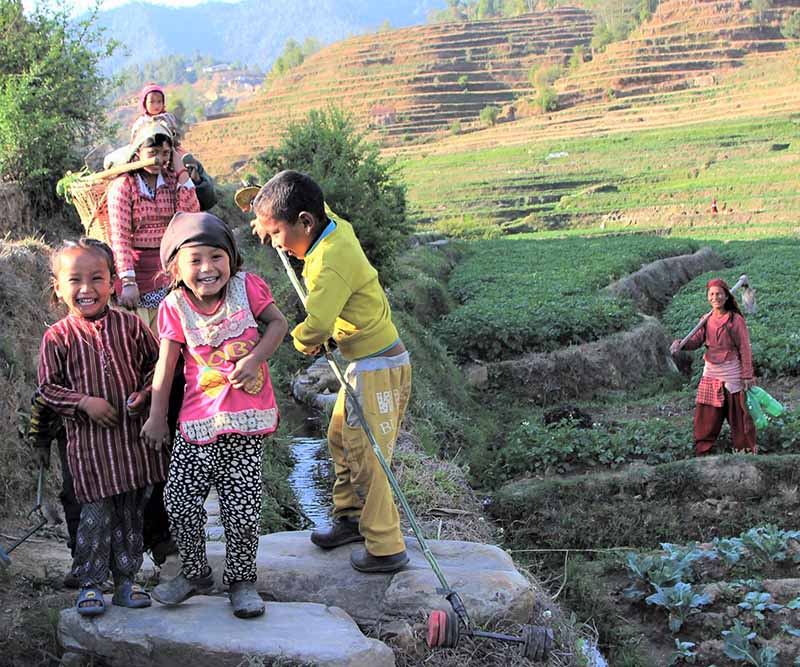 During my walks, I usually would cross paths with my patients working in the fields.  One of my favorite patients, I would frequently see walking her water buffalos to graze.  Sometimes, the buffalos were on narrow passages blocking my path, and she would graciously guide them off the trail so I could pass.  She was always glad to see me and brought me ground apples and spinach to the clinic.  One time I met one of my male patients hoeing in the field with 2 women, alongside another man plowing the old-fashioned way: guiding cows to pull the plow through the fertile dirt.   They all were smiling and genuinely seemed happy to be working together, cultivating their precious land.  While walking in the fields, patients invited me in for dinner a couple times, but I graciously declined as it was necessary for me to get back to the ARP site before dark.   Almost every walkabout, someone would ask in English, Where you from?  I would say America and that I worked at local Acupuncture Clinic.  I always received a welcoming, positive response about working in their community clinic, realizing the strong local support and appreciation for the ARP Clinic in Bajra Barahi. 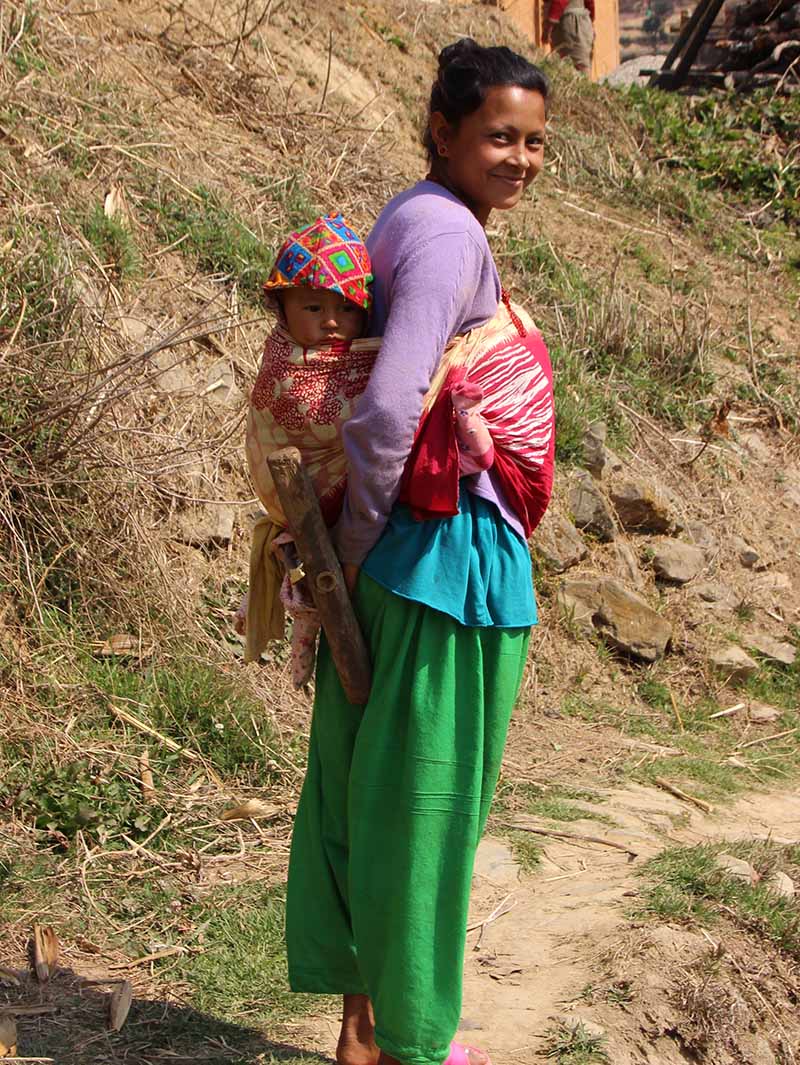 I soon realized that foreigners have a Pied Piper Effect on the Nepali children and stray dogs when walking about the fields and villages.  Every walk I picked up either children or dogs to follow me and join me on my walkabouts.   It is a wonder that I did not bring home one of these darling Nepali kids or puppies.   The children would usually gather and giggle, shouting, “Namaste, where you going?”  I discovered that most Nepalese people love having their photos taken, including the children.  Often, I would linger with the children, attempting to communicate through the language barriers and take photos.  If all we experienced were giggles, “Namaste” and a photo, that was enough for my heart to sing.  These children are different from ones in western cultures, because they are not coddled and overprotected.  I refer to them endearingly as “wild childs.”  Their clothing almost always never matches and they’re usually sporting dirt, a snotty nose or wild hair. Once, I even saw a toddler playing with a sickle.  Can you imagine any of this in the suburbs of the U.S.?  These kids are tough and crying doesn’t get them anywhere.  Often, the mother will carry the baby on her back while working in the fields.  One time I found a silent little girl about 3 years old, alone, in the cauliflower field.  She just curiously stared at me, while I attempted to evoke a response with ‘Namaste’.  Moments later, I saw this 3-year old walking down the path, nonchalantly, leading her mother past 2 water buffaloes, just a hairbreadth away.  I timidly followed her, thinking, if this child can walk next to these beasts, so can I. 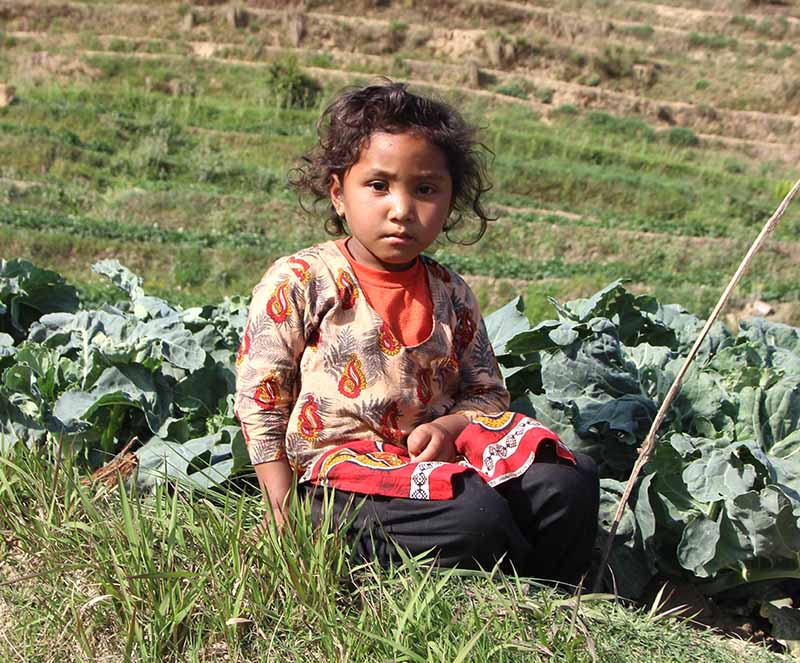 In rural Nepal, there are a lot of stray dogs that are territorial and can behave more violently then the domesticated ones in western cultures.  One time as I was walking the road out of town, a couple dogs approached me growling.  It was scary enough for me to turn around and walk the other way.  I noticed another golden, short-haired dog silently begin to follow me.  At first, I was a bit scared, but began to realize his kind intentions.  I started to feel like this dog was looking after me to keep me safe. (No, I did not have food in my pack.) He closely followed me for over an hour, down into the valley and even sat with me on a hilltop for some silent, contemplation.  Then, he followed me all the way back to my door at the ARP site.  I call this dog “Yoda” because he is wise; and in my photo, his ears are flattened on his sides like Yoda.  Ironically, I had taken this photo a week before he followed me, while he sat on the edge of a steep bank overlooking the beautiful, lush valley with a large, delicious bone all to himself.  I noticed right away this dog’s sweet energy and took his photo.  Little did I know, Yoda would soon be my guardian angel during a walkabout. 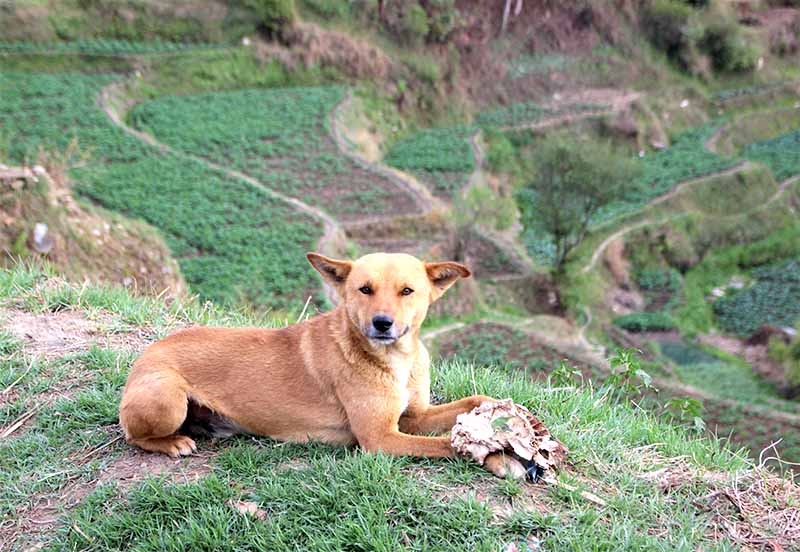 My walks through the fields and villages in the Makawanpur district of Nepal became ritual journeys during my time living there. The harmony of the lush landscapes and vibrant culture, along with the Nepali people’s rooted connection to nature, created special memories for me that will live on in my heart forever.  I reflect back on the lifestyles and culture of Nepalese, “subsistence farmers”; and how in the west, these people would be considered impoverished and underprivileged.  Hmmm, maybe the world has got it all backwards?  These people live amongst cohesive communities and families (with minimal crime or divorces), panoramic views, clean air with deep connection to land and their food source, eating simple diets of rice, vegetables, chicken or buffalo meat and tea.  Yes, they work hard, but they also have no need for the gym.  How many people in the western cultures in their 60’s or 70’s can even walk up a very steep hill, let alone with a doko full of potatoes on their back?   Who really is impoverished here?  However, the one thing these people do lack is proper healthcare, and I am so grateful to have been a part of the solution through ARP to fill this void for these amazing people and culture.  Namaste Nepal, I love you and promise to return! ---Trudy Wendelin 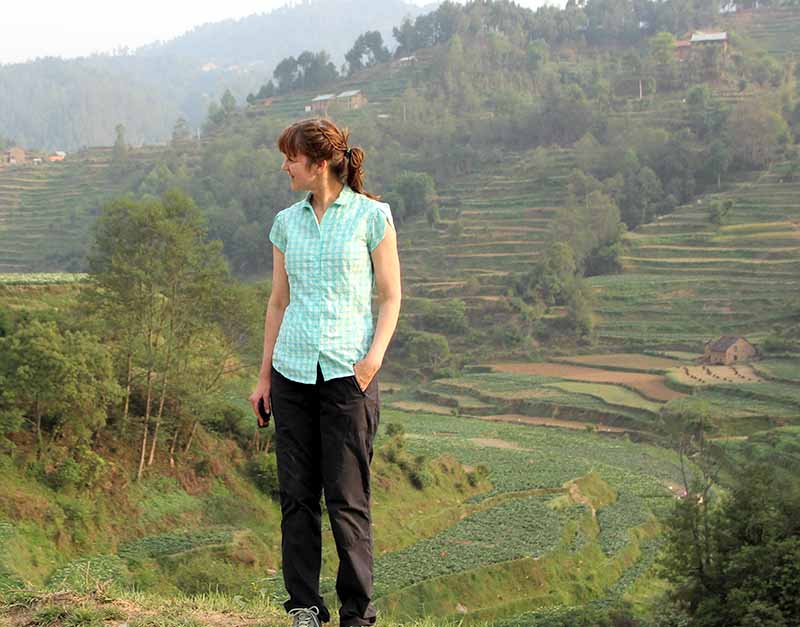