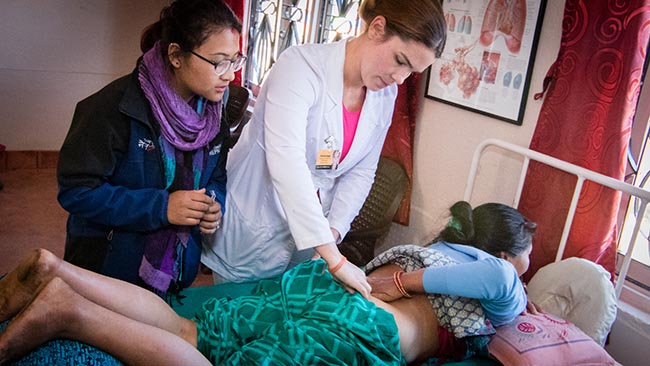 Has anyone ever seen the movie, or read the book The Hunger Games? I know it is a teen drama but I am not sorry to say I have done both, and rather liked them.  The story of the Hunger Games itself is definitely fantasy, but one scene does tend to pop into my head from time to time while I am here in Nepal.  The scene when the two poor kids from district 12, get taken to the capitol to have a feast.  The kids are in awe that people have so much money, and spend their money on things like fashion, waxing, elaborate and ornate everything.  While they are at the feast there is more food than they could possibly imagine, never before have they seen so much food, and people who can eat so much.  Then a small vial of liquid comes around, and a citizen of the capital tells them that this liquid is to make them throw up, so that they can continue to eat more. That scene is basically the epitome of indulgence.  The reason this scene tends to come to mind while I am in Nepal, is not because that movie poses any semblance of reality at all, but it serves as a stark juxtaposition of extreme poverty, and extreme overindulgence. 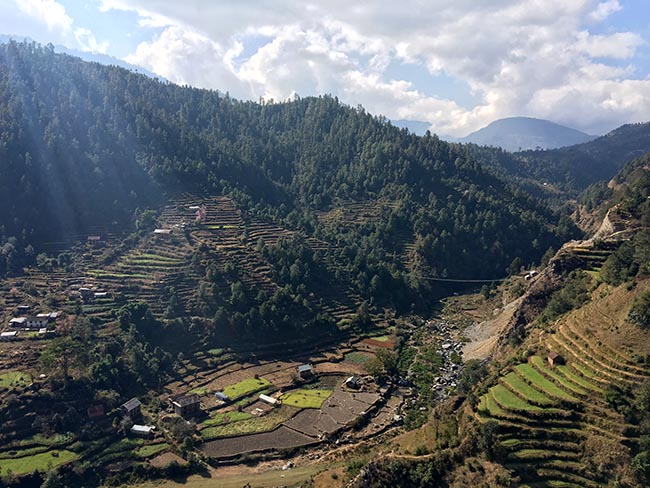 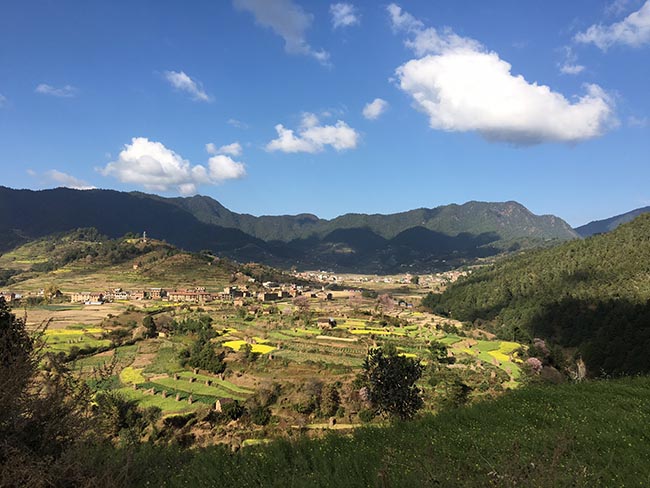 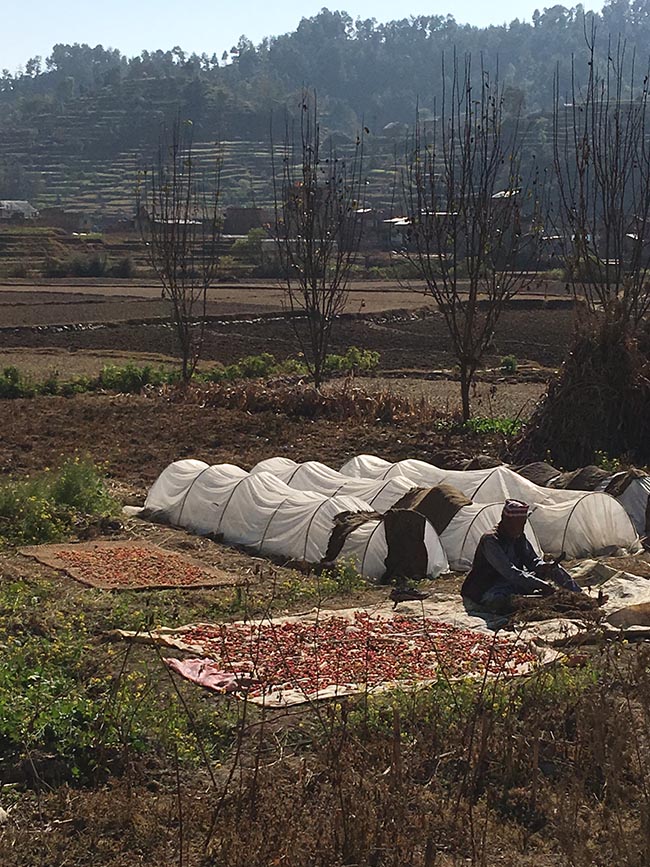 These are two realities that actually do occur in real life, and even my modest life in Portland Oregon seems very excessive as I spend time here in Nepal.  I drive a car. I don’t have to walk 4 hours to get to my doctor. I shop at New Seasons, Portland’s boutique food market, and I love it.  People here basically grow all of their own food.  Not only do they grow their own food but also as subsistence farmers with no big machinery, they carry incredibly heavy loads on their heads and backs, around 50 to 90 Kilograms to be exact.  There are 2.2 pounds in one Kilogram, which would make that load 110- 198 pounds.  When was the last time you saw an American carry a load like that who was not some sort of extreme body builder?  In Nepal the houses are generally built so that the goats, chickens, water buffalo and cows live on the first floor of the dwelling, and the family lives above that.  Eventually they slaughter these animals for food, a perfect example of rural farming, and certainly much healthier than factory farming, but it is hard for my American sensibilities to wrap my head around. My pets live in my house, and my pets are treated like my family, the idea of living in close quarters with a living creature, nurturing and caring for it, then killing it is very foreign to me.  Logically I know this is the best kind of meat to eat, I know that it’s healthier than how we raise and kill animals in the states, but I suppose I have attachment issues.  I wonder to myself, would we eat as much meat as we do in America if we were forced to live with life and death in this manner? 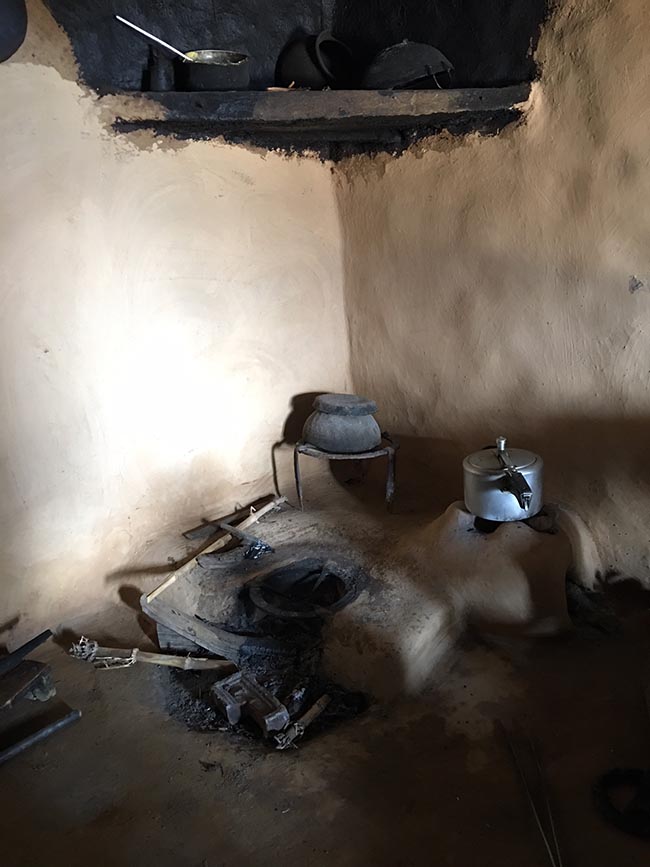 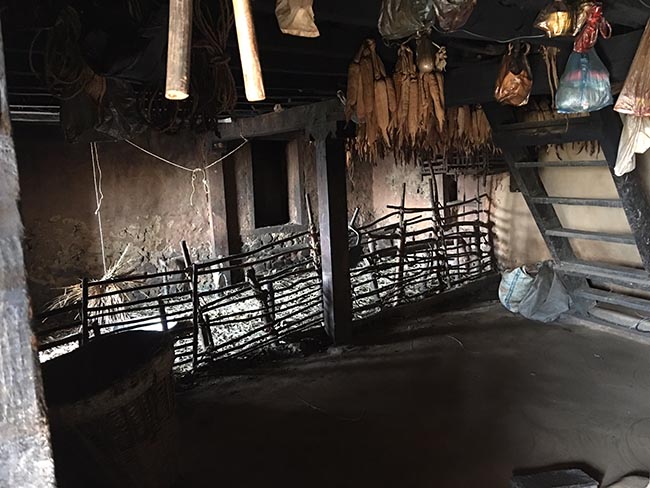 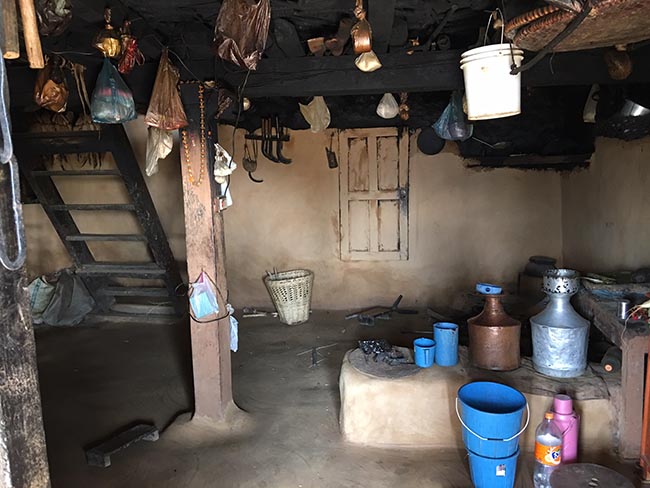 Then there are the dogs.  We call them mans best friend back home.  American dogs drive in the front seats of cars, eat gourmet pet food, and probably have better health care than the average American.  In America we have a humane society that keeps our streets relatively free of unwanted suffering animals, and we also have state animal control agencies that do the same.  If one finds a sick or injured animal in Portland, there are 24-hour pet emergency centers that you can drop the animal off at and feel like you were a Good Samaritan.  Here in Nepal there are none of those things.  Hungry and injured dogs roam the streets with gashes in their sides, ribs sticking out, and mange affecting their coat.  Even the youngest dogs that are most successfully able to forage food look as if a strong wind could blow the over.  The other day a group of us was out walking and found a puppy running down the road, orphaned and afraid.  We picked her up, I named her Lapsi, and if everything goes well she will be making the journey with me back to America.  The Nepali people are inundated with dogs, they have to protect their other animals from dog attacks, and they don’t eat that much themselves, so feeding dogs is out of the question.  I imagine that when you see dogs suffering everyday, you have to steel yourself to the plight, because if you tried to feed one dog then more would inevitably show up, and you can’t possibly feed them all.  So the people here are not dog lovers, they throw rocks and bricks at them, which to a western onlooker seems cruel, but it is simply that the people have a different relationship to life, death and suffering than we do in the west. 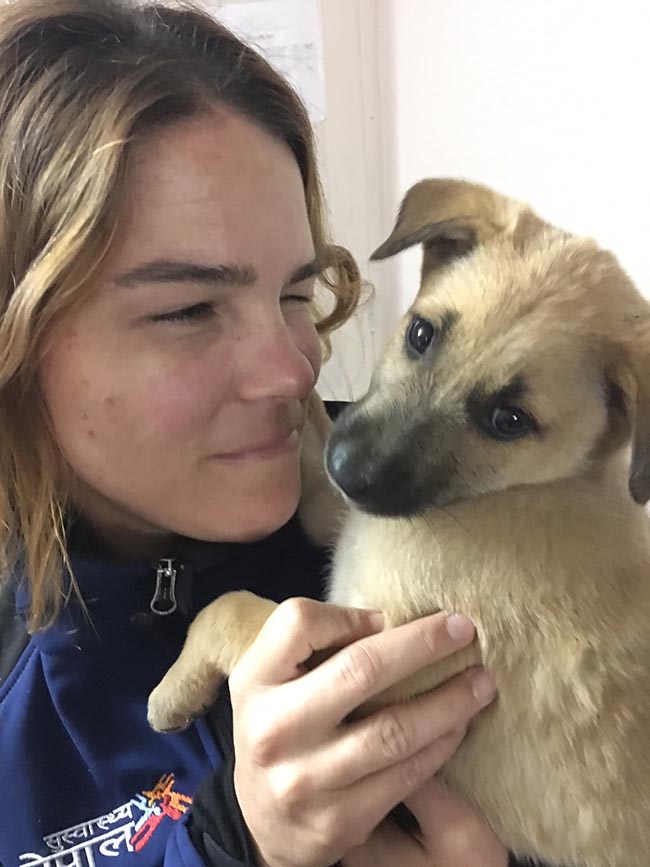 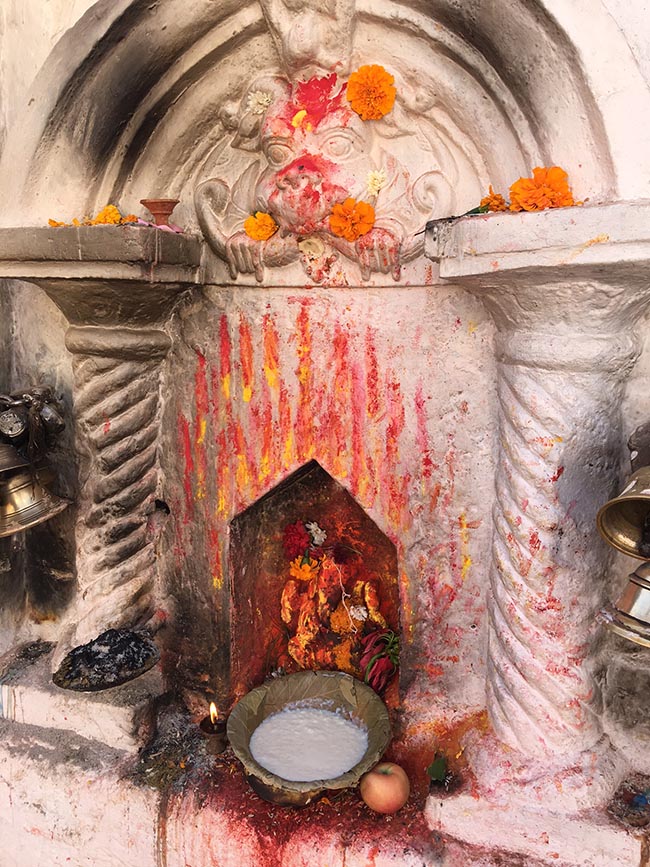 The people of Nepal are a God fearing group.  God is everywhere; there are shrines to Gods all over the place.  At the watering hole you have a shrine to the water God.  In the field you have a shrine to Shiva, the creator.  In every home there seems to be a little puja, a shrine to Shiva, or Ganesh- the remover of obstacles.  The gods adorn their jewelry; you can pick up a pendant or ring with Ganesh, carved into coral or jade. When they slaughter their animals they take them down to the temple, adorn them with blessing, and have a shaman ritualistically kill them before they eat the meat. They are a hard working people, who care about family and look after each other like they are all one big extended family.  It is not unusual to be called sister or aunty by the people you know, even if technically you have no blood relation.  In the clinic they are often sitting next to each other carrying on conversations and dispensing their own advise and when you ask them if they know each other they say, “No, we just met”.  It seems that the biggest concern that an elderly person with body pain has is that they are able to get back to work.  An unproductive person is a drain on the family’s resources and so they strive to remain useful in some way. 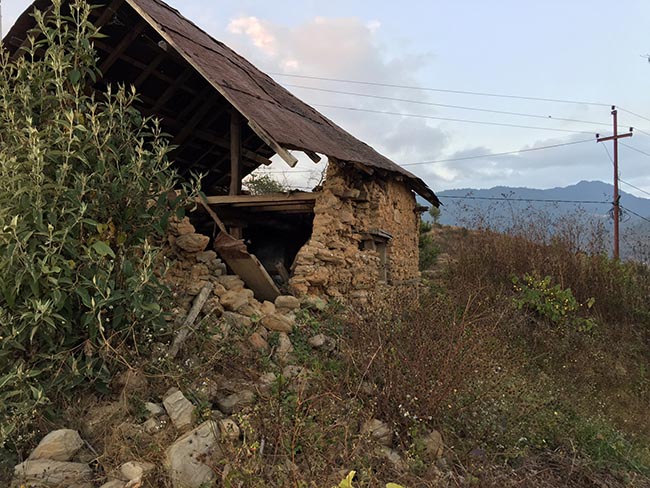 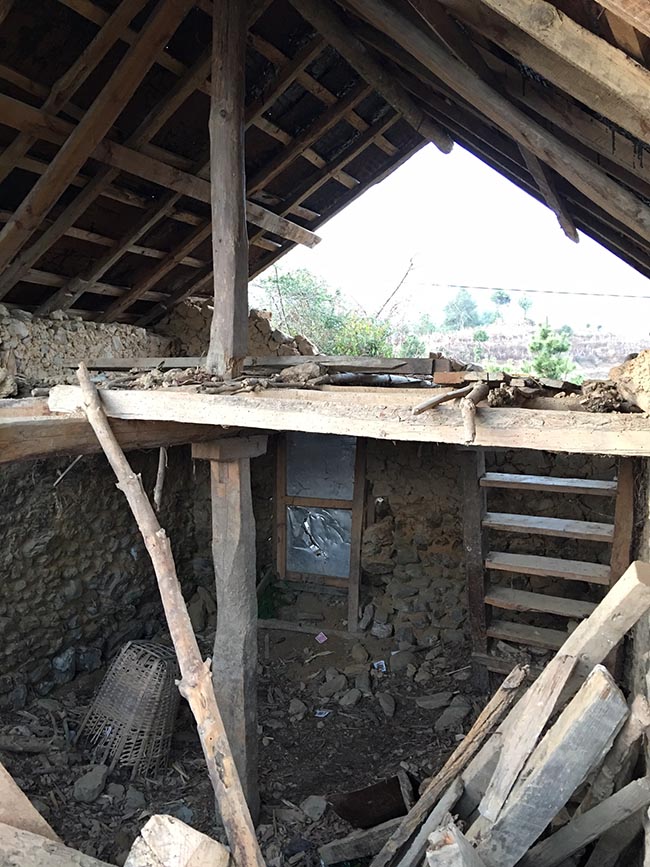 In Nepal they are still rebuilding their homes from the big earthquake that Nepal experienced 2 years ago. Their houses seem to be made of earthen bricks that are held together with a mud that solidifies.  The floors are packed dirt and their stairs are really ladders.  In my ignorance of the area and style of houses I used to tell people, “why are you climbing ladders at your age?” or “try not to walk up and down hills while your knees are healing”.  Then I realized the ladders are actually their stairs and what they need to climb to get to bed. Or, they live on a hill, so in order to get too and from home they have to walk up and down hills. There are no showers in doors, rather a local water pump where people go to shower on the side of the dusty road, with only cold water running out of it.  They also do their laundry at the water pump, or by the river, then let the laundry dry in the sun.  Back at home in America I am a serious hot shower taker.  I take a shower once a day, and it is usually scalding hot.  Here in Nepal I am very lucky that the compound I am staying at does have solar power heated water, in limited quality.  So I am fortunate enough to have a warm shower a couple of times a week, this is definitely not the norm, and in clinic your alcohol swabs quickly turn brown in an effort to sanitize the needle site.  At our compound we also have a propane stove, and some of the wealthier families do, but the vast majority of people still cook by burning wood in their kitchen that has no ventilation. Needless to say, we see a lot of COPD in clinic due to the wood burning stoves. Because most of the houses are damaged from the earthquake, many people have constructed temporary bedrooms that the entire family sleeps in made of tin. They sleep in tin sheds. 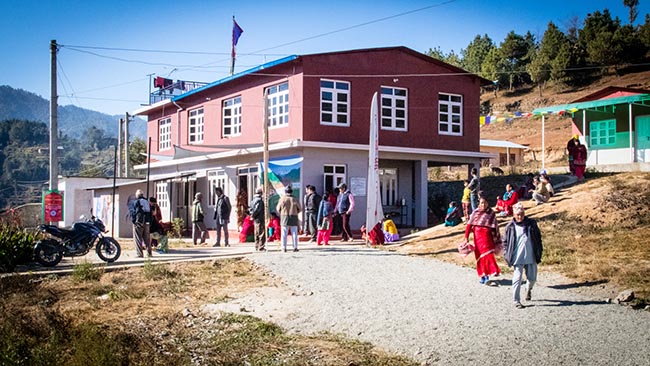 So what is the point of my comparison? Why am I going on about wealth and poverty? The reason I feel compelled to speak to all of this is because we are so fortunate in America, and sometimes when you are saturated in the Western comforts that fact is easy to forget.  I mean Donald Trump just ran a campaign with the slogan “Make America Great Again”.  But the fact of the matter is, America is great.  We have hot showers, we have washing machines, we have indoor plumbing, indoors heating, and we don’t live in houses with dirt packed floors.  So the next time you think to yourself, “I wish I had a nicer car with blue tooth”, or “My house isn’t big enough”. Take a moment to count your blessings, then go plan a trip to a third world country and get a healthy dose of perspective.  --Danielle Reghi