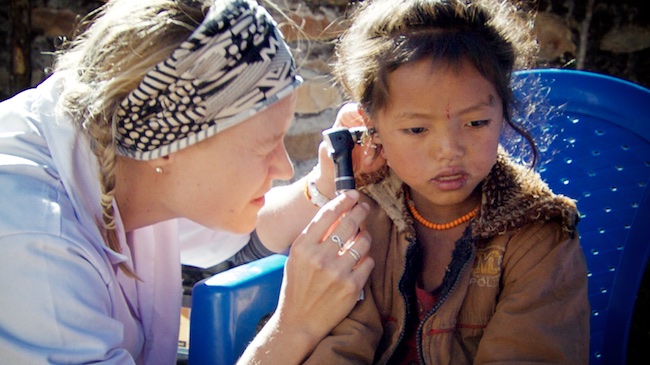 In my fourth week of volunteering at the Kogate Clinic, I hiked over an hour away to a town in the next valley called Ipa. Suman (my awesome translator) and I were on a mission to see an old patient of the project that has ALS (a degenerative neurological disease) and can no way make it to our clinic.

Bim is in his 80's. He can't walk and can only really manage to go from sitting to to lying by just falling backwards onto a well placed cushion. If he wants to sit back up he needs someone to lift him. He lives with his wife on the top of a hill overlooking Ipa valley. From the other side of the ridge you can see white capped Himalayan peaks across on the horizon. It is really quite picturesque, but because it's so remote walking to and from here can be quite difficult. The road there is very uneven and rocky; even a motorbike would have trouble with the steep climb. 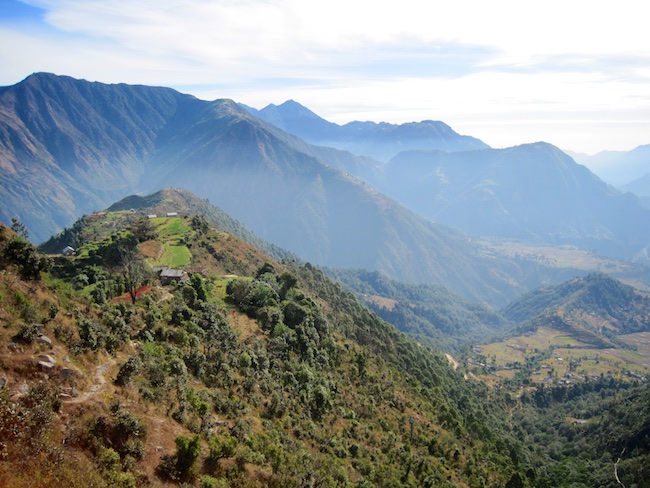 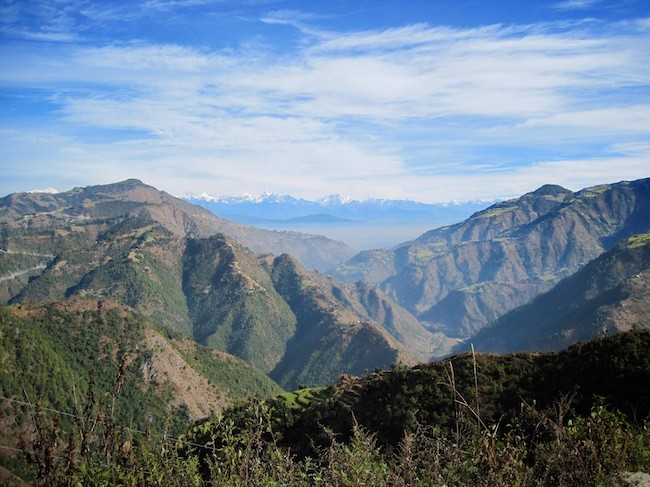 We arrive at Bim's, passing the neighbouring house where a couple of grazing buffalo peeking up at us and a dog barking protecting his territory greet us. Bim is sitting on the porch of his little mud house looking a little blank and weary. His wife gets up to welcome us and asks if we'll be staying for lunch, which we politely decline. She herself is in her 70's, a tiny lady that has obviously worked hard her whole life. She stands so stooped over I can only imagine that having her husband immobile has given her more than her fair share of work each day.

This is my first experience visiting someone to do a remote treatment. I'm not even sure where to start. I ask how he's doing and we go straight to checking out his worrisome bed sores. After attending to these and educating his wife to keep them clean and dry, I proceed to cut his finger nails and gather more information about his general well being. 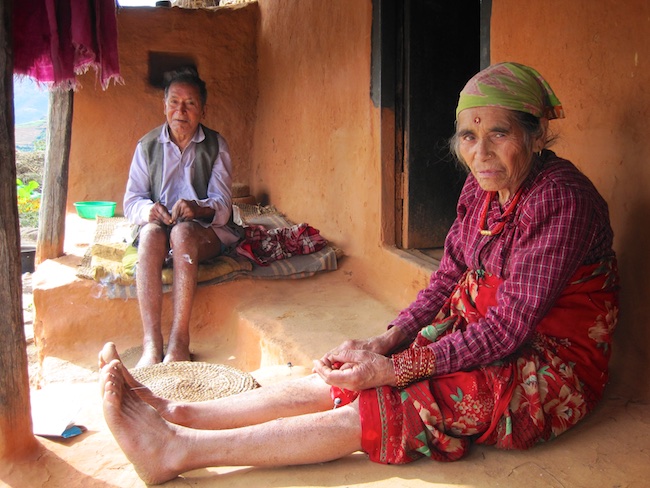 While he was still up for it, I gave him some electro-acupuncture to stimulate the muscles in his legs but he didn't last long before getting uncomfortable. Staying in one position for too long was Bim's biggest problem and his wife can barely manage to help lift him from sitting. I'm guessing without any extra help she must drag him across the mud house floor to his bed.

I chatted and demonstrated to Bim the importance of regularly moving the muscles in his feet and legs to preserve the limited movement and strength while helping his circulation. While I gave his wife an acupuncture treatment I kept checking to see if he was doing his exercises, which he found quite amusing.

Luckily, I had packed some herbal antibiotics which I prescribed partly for his bed sores and also more concerning was his burning and occasionally bloody urination. I was concerned he had a possible infection, prostate issues, or something more sinister, so I planned to further discuss with the team the logistics of getting him more care.

This really felt like a hopeless situation I was walking into, however, he has no other support; while his wife is doing everything she can. All I could do was the best on the spot healthcare I could provide while trying to make him smile and feel cared for. After spending just over an hour with the couple Suman and I made the trek back to Kogate in time for lunch. On the way Suman said 'I'm so happy today!' I asked him why and he replied 'we got to go for a nice walk and did you see the look on Bim's face when you said we'd be back next week?' I thought, yeah he's right, I feel happy too.

That moment really resonated with me as to why I'm really here.

I went back and visited Bim and his wife two more times before the camp ended. My last visit was bittersweet. I'd had a feeling this would be the case, so when Suman and I were walking to his house that day, I told Suman that I wanted to focus our visit on making Bim smile. 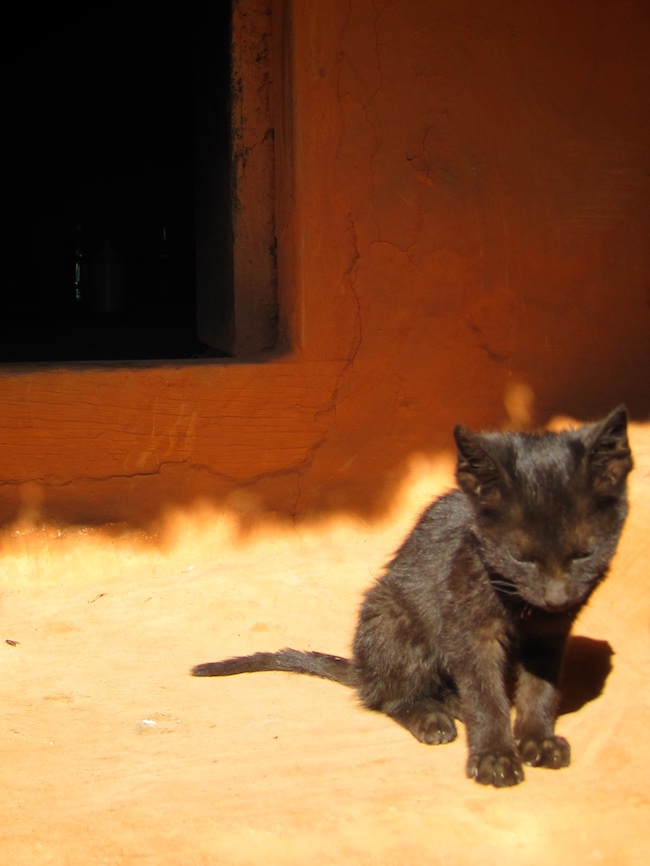 When we arrived Bim was lying on his porch with a tiny little black kitten by his side. The results from his urine test I had his son get while he was in Kathmandu were not great, but his discomfort when urinating had improved. The hardest part was seeing Bim's decline over the past two weeks. His feet were swelling more and now he couldn't wiggle his toes. We checked his sores, cut his finger nails and I decided only one acupuncture point was necessary as I gave him leg massage instead. We talked about the kitten in which his wife wasn't too keen on, but I could see he liked this cat. The cat had no name so I suggested Bim pick a name for the little kitten. He named her Kali (which means black in Nepali) and took much delight in me asking about Kali and bringing her over to say hello to him.

Once we'd finished his treatment and discussed getting another urine sample tested, Suman and Bim's son lifted him onto a straw mat in the sun. He laid on his side while I gave his wife an arm and shoulder massage in the sun. She looked so relaxed by the end of it. It was as if I'd lifted a weight from her shoulders. I was chatting with her and their son, until Suman pointed across to Bim where I saw him sleeping peacefully in the sun. He had only been sleeping one to two hours a night and in the past week had not been able to sleep during the day. This was a blessing. This was also the last time I saw Bim. And this is how I would hope he passes on when his time comes. Even though I knew I couldn't drastically change his situation I felt I gave him, his wife, and their son a little relief. --Rachael Haley 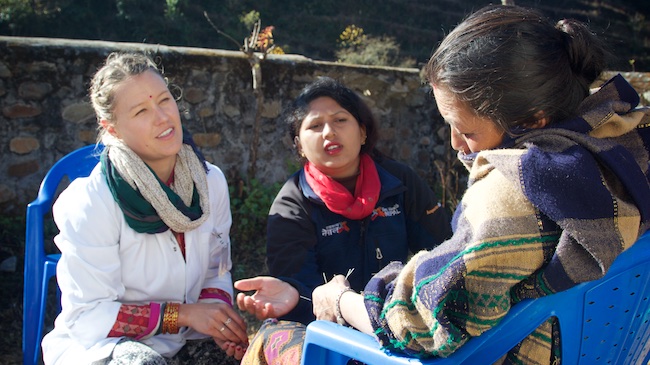