When do you stop CPR? 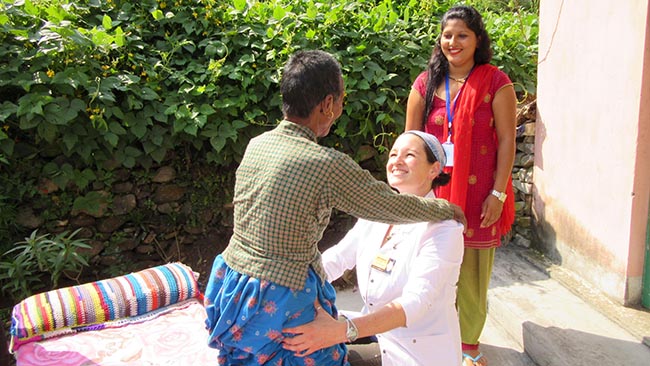 Long after I realized the man's injuries were too extensive to survive but not until his wife said "arret" and gently reached out with her bloodied hands to stop my chest compressions. Coming to Nepal I knew clinic would challenge me in ways I couldn't even comprehend, yet I looked forward to those challenges and the personal and professional growth that would hopefully follow. I knew I would help many people, and anticipated it would be the ones I couldn't help that would stay more present in my mind. And it's true, they do, but not in a way I ever expected. 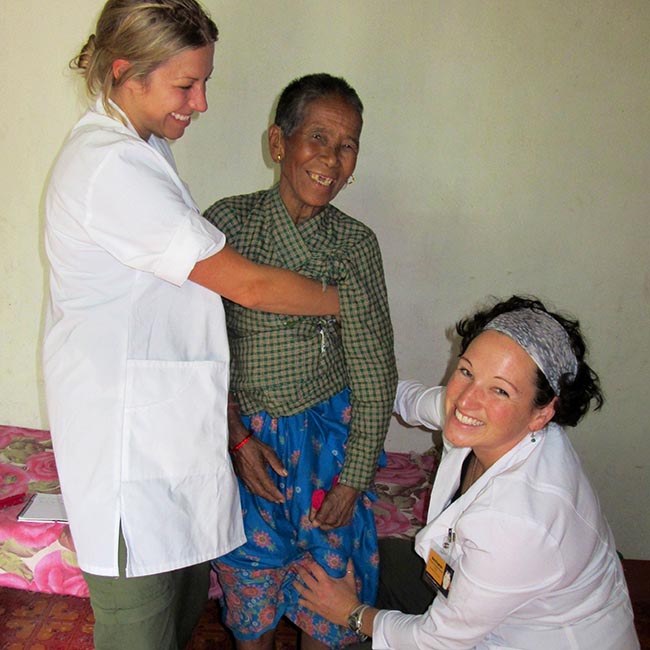 There appeared to be confusion ahead, someone mentioned rockfall and an injury. I asked if there was a doctor present, said we were a medical team and offered to help. People cleared the trail and we were ushered ahead. My heart raced, do we have the skills needed to help? A man was unconscious in the middle of the trail with an obvious head injury and a woman kneeling at his head. No one seemed to be taking charge, I was so grateful to have Jacq and Susana with me. We later realized our porter, Peking, had been there for quite some time before us. The woman started speaking rapidly in French, I said I spoke a little French and asked her to slow down. It appeared the man had been hit in the head by rockfall 15 minutes prior. He was just below the rockfall and looked to be in pretty bad shape. We quickly moved him slightly down trail to a safer area. I felt little to no pulse and Jacq started started chest compressions as we tried to gather more information. We checked his pupils with my headlamp and they were fixed, we were told he had been unconscious the entire time. I took over chest compressions and quickly realized how extensive his injuries were. The woman at his head was covered in blood and his wife, she told me they live in the mountains near Toulouse. She asked if I thought he would be ok. I expressed my concern with his injuries and difficulty for rescue. We then realized the man had been hit by a rock and fallen off the trail and it had taken an hour and half to get him back up to the trail, where he had been for 15 minutes. It quickly became clear he not only had a significant head injury, but likely a spinal injury from the fall and it had been too long, he would not survive. There was nothing more I could do for him.  At this point all my attention shifted to his wife. The rest of their party and the other guides and porters stood back, they had also been there much longer than us and I can only imagine what this first hour was like. We were told a helicopter had been called, a teahouse was ten minutes down the trail and a landing site further below. I said we need a stretcher, trekking poles or branches I suggested. I continued chest compressions as his wife was asking me what I thought. I gently said it was a bad injury to his head, I was worried about what further damage had been caused by his fall and pulling him back up to the trail and feared it had been too long. She nodded. I said I couldn't feel a pulse and he wasn't breathing on his own, but I would continue chest compression as long as she wanted me to. It would be a long trip down the trail, waiting for a helicopter and then a half hour flight to Kathmandu as well. She had amazing composure and seemed to be slowly putting everything together. I continued compressions and allowed her time. "We live in the mountains, the Pyrennes, I can't believe he will die in these mountains." She started to cry. It was truly heartbreaking. Here is a woman whose name I do not know yet and we are in the most intimate moment. She reached out and gently pressed my hands to his chest "arret" and she looked up at me "Merci, thank you for trying." People arrived with two big pipes, ropes and big plastic rice bags to form a stretcher. Bistare (slowly, which is my most used word in clinic) I said and then asked for 5 minutes and waved people away to clear the trail as I had no idea how long it would take to get this man down and what shape he would be in. Jacq and Susana cleared the trail and we stood back and gave her time. My thoughts raced to my family, his family and my years of guiding. She knelt there for a few minutes and then stood up. We rolled him onto the stretcher and I kept saying gentle and bistare. I picked up his bloodied backpack in one hand and his wife tightly grasped my other as we slowly followed them down the steep and winding mountain trail past the tea house to the a wide spot on the river. Just days before we stood happily gazing up the valley and to the adventure that was waiting for us. I lead her to the river and helped her wash the blood off her arms and face. The three of us sat with her next to the stretcher waiting for the helicopter, watching monkeys cross the river and swing in the trees as other groups looked on. I gently rubbed her back, uncertain what else to do. Susana brought out her space blanket to more fully cover him and we held it down with river rocks. There were three others in their party but they had mostly stood back, I expect in shock. One came down to sit with her and I started to gathered blue yellow and white flowers into a bouquet for her to place on his chest. I expressed how sorry I was for her loss and hugged her, she was grateful for our efforts. I think it was over when the rock hit him she said, he never put his arms out as he fell down the cliff. Loading the helicopter was less than graceful and a very difficult sight, but as it took off she waved and blew kisses. We stood in quiet shock and it started to sink in more fully. I no longer could keep my composure and felt a heaviness settle over me with tears in my eyes. 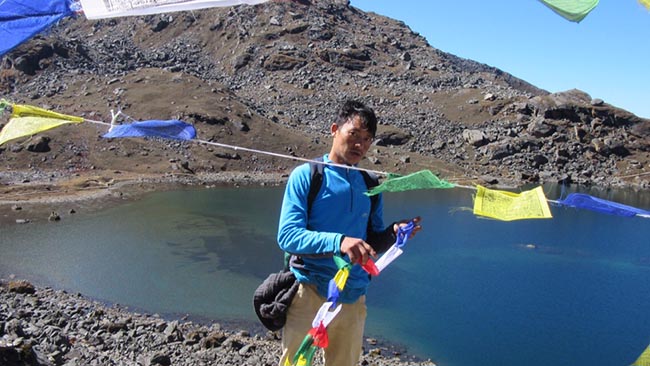 We still had three long hours hiking uphill, I was lost in my thoughts. Personally, the mountains are my playground and it shook me to the core to see such a tragedy in a place that gives me so much happiness. We are in such a rough country, yet I do not think the outcome would have been any different on any trail anywhere else. My heart goes out to the guides and porters, obviously shaken and overhelmed. I spent ten years guiding and gratefully never had to deal with more than minor injuries. And to the couple, they remind me of my parents who traveled extensively and loved to walk and hike all over the world. It could easily have been my family. Someone lost a husband, perhaps a brother and a likely a dad. Shortly oceans away they would be getting a terrible phone call.

That evening from our little hilltop village we could look way down the valley to the river. They has been out of electricity for 9 days which seemed appropriate. Our group, the four of us, two guides and two porters ate Dahl baht together by candle light. Later we climbed up to the roof and sat under the nearly full moon to talk. Shaken and sad with graphic images flashing through our mind we talked about what happened, could we have done more and what our roles had been. We will never know what occurred before we arrived, but I truly believe we were meant to be there. Medically there was nothing that could be done and I came to that conclusion quite quickly and clearly, allowing me to focus my attention to his wife. I spent two hours in one of the most intimate moments in ones life with a woman whose name I would only later learn. It was my hope that I could offer some calmness, comfort and compassion. Allow her some time and space to process before being whisked from deep in the mountains to the chaos of Kathmandu and the reality that awaited her. 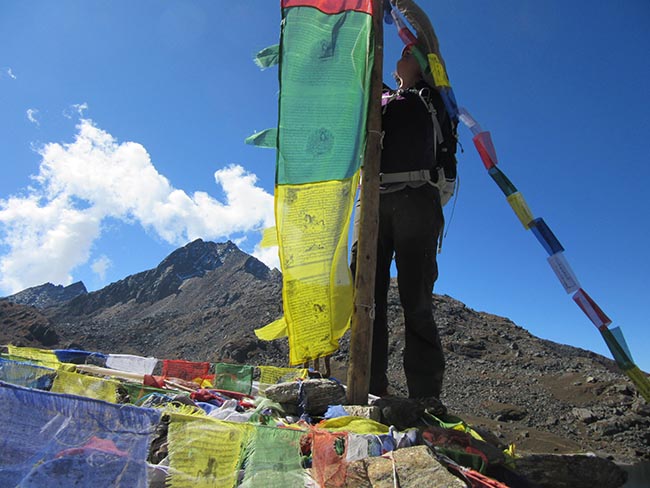 I sat under the moon for hours before finally going to bed, and was then bolted awake with an image at 3am. I returned to the roof flooded with moonlight and prayer flags gently blowing in the wind. What was it going to take for me to process? I bought prayer flags the next morning and the following two days my heart and body felt heavy. I wasn't sure if the flags were more for myself or for the couple. We got up at 4:30am to hike high up to Gosandkunda Lake, a sacred Hindu lake. At first glance I saw the place across the lake where the flags were meant to go. Everyone in our group had a moment with the flags and then Peking, our porter, and I hiked up. We tied the flags togther, one for each if them. Peking tied one end to the trident at the base and I climbed up to secure the top. It felt peaceful and calm, and as if a large weight was lifted off my shoulders. I was suppose to be there for some reason. Her friend had asked for my email and I looked forward to one day hearing from her. In time, I hope she finds comfort in the care I we tried to provide and I will share photos from our sacred lake. 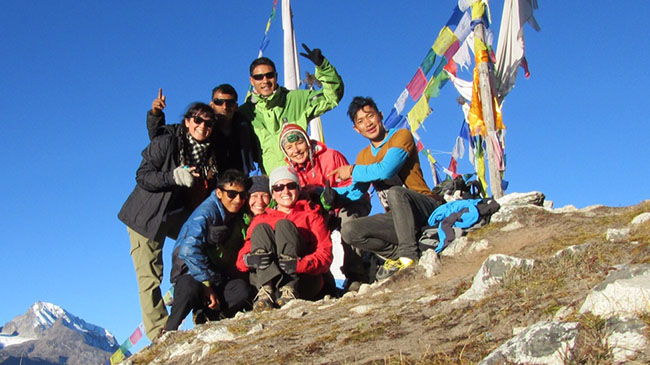 At the end of our trek I returned to Kathmandu to a short but wonderful email from her friend. They were back in France, grateful for the help and compassion and sent details on the funeral in hopes we might light a candle or hang flags. We are back in Bhimphedi and clinic has reopened after the holiday. Tomorrow morning we will be up early to walk out to my peaceful morning viewpoint for a quiet moment and to hang flags at the same time as they will be remembering in France. Exactly one week after his passing. Those flags will be hung with a much lighter heart.

Before I left for Nepal I was told, "You do the best you can and it's usually enough." And it's true.  - Beth Fitzgerald